My concern is that the bark damage and poor circulation may ultimately kill the tree. Also, the narrow aspects of the tree that contains the damage would be a weak point in the tree, that will further weaken by being shaken to obtain the fruit which will cause the tree to fail at the weak point. In using the device, I would place the device on the tree without being too tight on the bark to cause damage during initial installment. The tree should grow into the device, and the areas above and below the device will have the opportunity to grow wider than the area in the device, resulting in the intended form.  I would also consider putting the device on and off periodically. If you leave it on for too long the tree will grow over it, defeating the purpose. With periodic removal the tree may obtain minimal damage in the process of girdling.  I think to test whether it will work as desired, the minimum experiement of 5 test trees to 2 controls is a good start to gauge success. From there I would continue to increase test subject and variables.  Lastly, you may wish to enrich the soil nutrients (elements) since the tree will be stressed as well as water regularly.   Please keep me updated on how it goes :)

Answer: our last experiment showed no bark damage or other issues.
Posted by SergSam at 6:45 PM No comments:

The Bendable Tree project in the Crowdfunding platforms

From the beginning we tried the main crowdfunding sites, trying to collect funding for the new company that will research and manufacture the wooden presses that modify trees.

These relatively new sites publish projects from entrepreneurs and offer supporters several ways to help. Some of them are allowed to offer equity in the new companies, others simply receive donations in exchange for non-monetary rewards. The project owner decides which rewards will be offered to the supporters that donate from a small amount (maybe $10) to larger sums.

The more active crowdfunding platform is currenly KickStarter.com, but it is restricted to US citizens. I am searching for a US-based partner that will help me to appear in KickStarter and start collecting some money.

A site oriented to science and scientists is I am Scientist . One of its features is that helps publish an academic profile of the project author, including all scientific publications. My project is currently being reviewed there.

We the trees is another crowdfunding site that is oriented to permaculture. It looks like a good fit for the Bendable Tree Project. I submitted the project and they are evaluating it.

Idea.me is also a crowdfunding site in Spanish. I am submitting to it because I might find sympathy among fellow Latin Americans or Spaniards.

Trying to be creative about rewards, I offered Dedicated Restricted Trees, with a plate with donor name. The tree is photographed and the photo is sent to the donor and published in the web. I also offered to donate fruit (collected with my method) to the poor neighbourhoods here in Buenos Aires or elsewhere.

So, if you want to donate, please visit some of the sites above.
Posted by SergSam at 1:13 PM No comments:

Mechanical tree shakers and how to protect the fruit from bruising

This one is "Cherry Harvest", showing 2 movile shakers with giant arms to receive the fruit. Each arm has a rectangular plastic fabric surface that are located under the branches and can move to spill the collected fruit on a recipient: http://www.youtube.com/watch?v=X642dSCgxqU&feature=related 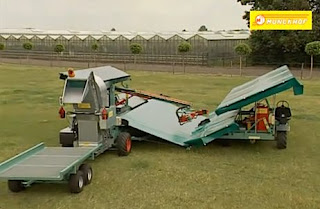 This olive shaker (Savisal, from Portugal) deploys an umbrella-like device below the tree before shaking:
http://www.youtube.com/watch?v=JYzFqSFyTRM&feature=related 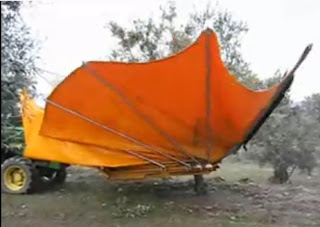 In here you see a net mounted on a mobile structure intended for olives or maybe other fruits:
http://www.youtube.com/watch?v=DvaK7VWx1rQ&feature=related . It is independent from the tree shaker. 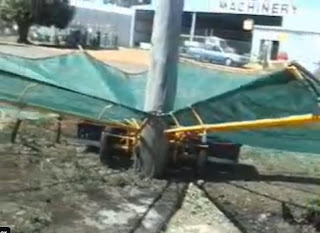 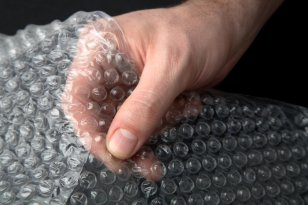 Posted by SergSam at 1:24 PM No comments:

A permanent service to fruit producers using the Restriction Press

Advisory Service for fruit tree growers: a profitable activity for the new company

For Licensers of the Restriction Press Technology: Design - Manufacturing - Analysis - Communication with buyers

Applying restriction-growth devices to a tree is not an all-or-nothing process. The press must accompany the growth, and provide protection at al times against excessive movement that could lead to breakage of the tree. Locations that can be affected by hurricanes or tornados need extra care on the tree-flexibility issue.

The presses have different sizes, according to the age of the tree that receives them. The smaller press is usually a 2-bolt press, as seen in the Diagrams page. It is replaced by a Small 4-bolt press after a year or two, and by a larger one after another couple of years.

Also, the presses need bolt-loosening once in a while. As the trunk grows, the narrowing forced by the bolted press can stay to thin. Thus, a little loosening will add more room to the narrowed part of the tree.

Shaking a normal tree is a delicate procedure. Too little force is ineffective, and too much can damage the tree. For that reason, mechanical tree shakers should be adjusted to each tree: size, strength, species, fruit ripeness and other factores. Some researchers are even developing software that should optimize the vibration force, amplitude and frequency.

Trees modified with our Restriction Presses are much easier to shake, because a little force obtains an ample movement. But when modified trees grow over certain measures (width, height, fruit load weight, size of narrowing/enlargement) the manual shaking is no longer an option, and a mechanical tree shaker is needed. When and how to implement mechanical shaking is also included into our advisory expertise.

Some fruit growers use abscision chemicals to cause the dehiscence of the fruit at the time of shaking. If this process is needed, we can advice on how to use them and on which trees.

Our laboratories and experimental fields will permanently grow new trees and carry out yield and breakage tests on the existing trees, under different presses and conditions. That information will be also sent to our clients as part of the service.

We can provide the calculation-based guidance to tree growers as a service to those who purchase the presses or license the technology from us.

The consulting business is an addition to the core ones: selling of presses, selling of modified young trees, technology licensing.
Posted by SergSam at 11:45 AM No comments:

The technical documentation now provides:
- sizes, surfaces, volume and weight of the available presses
- features of the product
- evolution of a tree with the modified parts
- how to apply the presses, when to loosen them, when to change them
- resistance of modified trees to fracture in the event of strong winds
- 3D model of the presses

Ask them if you are really interested in the product, either as investor or user.
Posted by SergSam at 8:08 PM No comments:

On September 13 2012, I met with the Dean of the Faculty of Agronomy at the University of Buenos Aires, Ing. Agr. Rodolfo Golluscio. He supported the project, suggested improvements and offered the support of the Enterprise Incubator at the Faculty of Agronomy (INCUBAGRO). He offered space to cultivate trees at INTA (National Institute for Agricultural Technology of Argentina) and scientists willing to participate.

This is important because it provides recognition from the most prestigious university in the country and the region.

Posted by SergSam at 2:32 PM No comments:

Picking fruit in large farms is mostly done by hand, although high-tech producers are testing and incorporating robots.  Scientists expect that -some day- those robots would be able to enter an orchard and go out with tons of fruit.

Those monster machines are scary, both to normal farmers that cannot afford them, and to the millions of poor migrant labourers that pick the fruit today.

But after questioning 500 fruit experts, the prospects of many multi-million dollars fruit-picking robots seem uncertain: a device costing U$D 3 per tree can replace them. 46% of responders said the little device could replace the expensive robots. 38% were undecided, 12% favoured the natural, human hand labour and 4%, who happened to be working in software for the fruit-picking robots, said the robots were better.

Lets take a look at the contenders.

On the expensive range of the field, Carnegie-Mellon Robotics Institute and Japanese researchers have been developing immense machines with a few dozens of eyes and thousands of robotic arms with hands and fingers. These robots locate the mature fruit, take them delicately with their fingers, spend a few seconds deciding whether the fruit is mature and deposit it in a basket.

An important part of these robots is the software that allows the robots to tell a mature from a still green apple. Or pear, or peach, because each different fruit poses a different challenge.  Those expensive machines need to be very fast, because Nature does not give us much time to collect ripe fruit, and when you rent a monster like that you pay monstruous bills.

The most common aproach to automated fruit picking is the tree shaker. Shakers are very aggresive approach to fruit picking, because they apply a lot of energy to trunks to produce a good crop. That energy is expensive in terms of fuel and also damages the bark, trunk, branches and roots. Software is also an important part of these type of fruit picker. There is a software that evaluates each tree and decides how much energy (wave amplitude and frequency) needs to be applied for optimal collection and minimal damage.

The third approach is "combing", a system that also requires precision, large number of combing arms, sincronization, amplitude of movement and artificial intelligence to locate the combs near the branches and move them.

The fourth approach would be "beating", using robotic arms to impact the branches and dettach fruits. Some machines combine shaking and beating. Of course, it is the most damaging method and only applies to nuts and fruits intended for juice or other processing.

This video of a Colossus 26-ton olive picker robot is a sample of how a brute-force approach is applied to a seemingly simple task: http://www.youtube.com/watch?v=lxS7s3BzIUk&noredirect=1 . Similarly, this is a monstruous olive picker:

The existence of some many expensive and complex approaches to fruit picking is a sign of no clear cut winner. For that reason, a most simple solution by a non-fruit scientist is winning adepts: The Bendable Tree Project.

This diagram shows the principle:

A wooden press forces the tree to develop a narrowing that allows easy shaking.

The method efficacy is now being confirmed by scientists at the University of Buenos Aires, School of Agronomy.

The information about the pressing device and a contact form is found at http://netic.com.ar/bendable-tree/ .